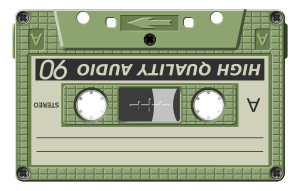 Hands up who remembers their first cassette tape?

The sad news of Adam Yauch’s recent death reminded me of my first tape. It was 1988 are we were living on the east coast of the US. My friend Brian made a copy of his older brother’s Licensed to Ill, by the Beastie Boys, and traded it with me. I had no idea who the Beastie Boys were but Brian assured me this was an excellent deal. It was.

Our family stereo normally played Michael Jackson or Lionel Richie so this pretty much blew my mind. I’m now listening again 24 years later and the memories are flooding back. Funny how music can do that.

Of course the copied tape was all part of the musical experience. A physical gift handed in exchange. Sellotaping over the anti-record mechanism so you could copy. Recording in real-time playing speed. Tapes twisting. Players chewing. Pencils used to wind the reels. Turning a tape over for Side B.

The experience is different now. I’m imagining how my 9 year old self would react to how I’m listening to the same music today. My eyes are wide and my mouth is open.

I thought cassette tapes were magic when I was 9. Music coming from magnetic tape, spinning past readers and amplified. Wow!

Now the music comes from somewhere on the web. I’m using the new Spotify iPad app, a massive improvement from the iPhone version. Since Spotify is based on a p2p network, the music I’m listening to can come from anywhere in the world. 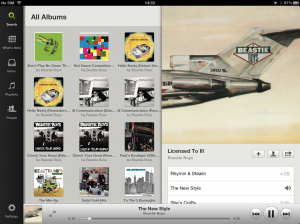 The iPad app requests a song and this request travels via Wifi from the iPad to our home router, then down the phone lines to the Spotify servers to request the first 15 seconds of the song. The encoded audio files then travel back from the servers along the phone line, via the home router into the iPad via Wifi. Meanwhile, the App is busy finding the track on the p2p network (to take the load off the Spotify servers). The iPad app unencrypts the file, sends it via the iPad speakers converting it into sound waves that travel into my ear, are processed by my ears and brain. All in 1/4 of a second.

That’s near instant access to more music than I could listen to in a lifetime for £5 a month (Student rate). Net result = happiness. And some arythmic head nodding.

Both my current and 9 year old selves are are amazing how technology has moved on over the last 24 years. We’re sure the next 24 will be even more amazing.

Any sufficiently advanced technology is indistinguishable from magic.

One thought on “Musical memories”